With the new season of Critical Role comes new characters! I am always fascinated by the different rules and methods people use for character creation. Trial, error, and seeing what goes over well. But the new season has had me reflecting on what all went into character generation for my campaign, the Skull & the Eye.

When I saw the character stats during the first episode of Critical Role, I had to ask what method was used, as three of the characters have very high stats (Caleb, Jester, and Beauregard) with them having half their stats at 16 or higher. Matt Mercer was kind enough to answer my question on Twitter and these numbers all made sense:

Yup, with a 70 point total threshold or you may reroll.

Six rolls with 4d6, dropping the lowest die, is a classic way to do stats. We actually did this for Toell’s Bed. But the 70 point threshold gives way to a minimum power level. 4d6 does skew higher, but not always. While playing Curse of Strahd, Jeremy, our DM, had us do standard point buy. He wanted to make sure there was a base level for us. No one felt overly superhuman (a crucial element for a horror campaign). I kind of liked it, dug my character’s array to be honest. So when it came time to do characters for the Skull & the Eye, point buy it was. 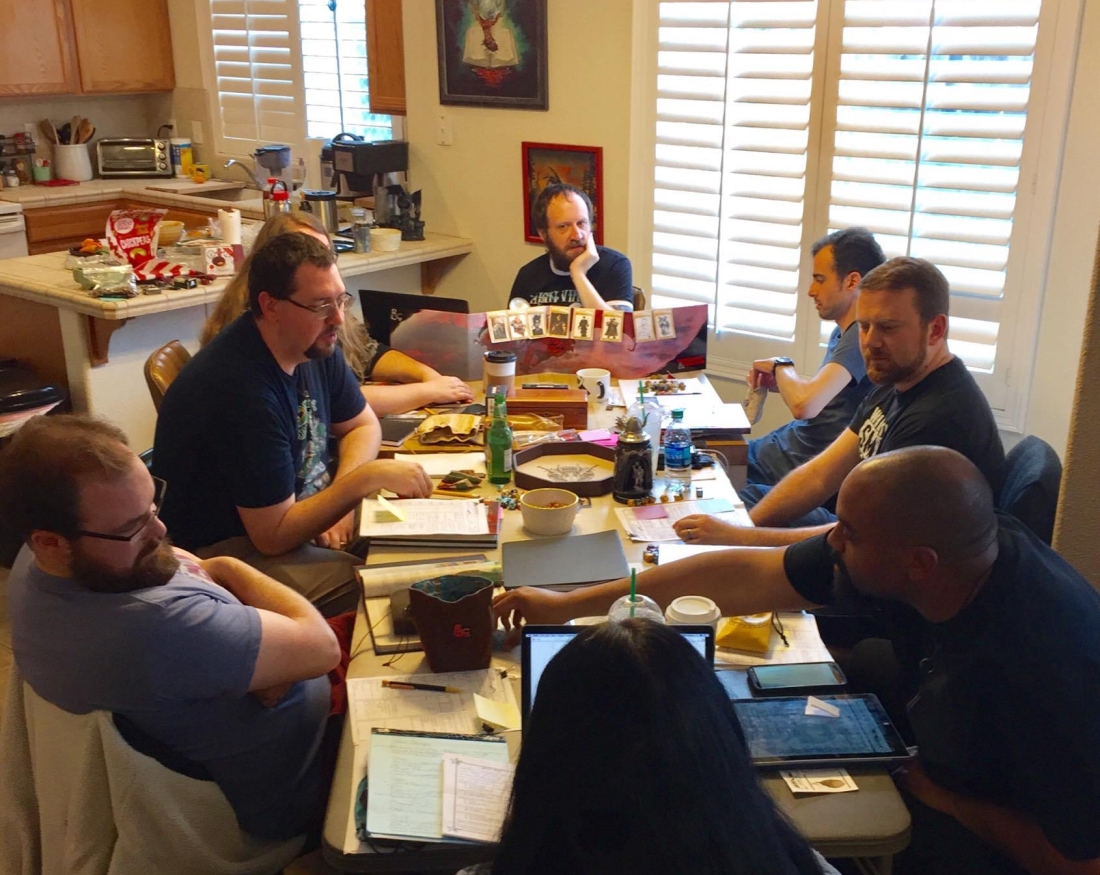 Rule 1 Stat Generation Method: 27 point buy as detailed on page 13 of the PHB.

Being that this is my own campaign setting, there are restrictions on which races are allowed as a playable. Dragonborn made a huge splash in 4e with a radical change from previous edition. While a fascinating race for many campaigns, they did not feel at home in my world. Another race I avoided was drow. Simply put, they have too much baggage and history that would be brought over. We actually found during Toell’s Bed that not having drow made for a more political and intriguing dimension between wood and high elves. The final player race out of the PHB I removed was tieflings. With the occult themes throughout my game, having walking fiendish descendants would reveal to much and undermine that theme.

So while saying “no” to a few races, what about saying “yes” to others? Well there were two I brought in from outside the PHB: eladrin and tortles. The Feywild had been established in the previous campaign, so eladrin were a natural option, along with their really cool Unearthed Arcana test material.

Well before character creation, during the initial plannings phases of this campaign, one thing that was brought up was the notion of independent islands on the ocean, where trade would occur. Around the same time, the Tortle Package dropped. Now I remember the tortles from my 2nd edition days, playing Mystara. I love these greenish lugs. But I wanted to put my own spin on them, so I separated the tortles into two sub-species: agassizii and abingdonii. Effectively there are desert and island tortles (much like their tortoise counterparts). I may post my rules for those at a later date.

Half-elves are amazing and a tad over powered in the rules a writte. We reign those in by taking away one of their bonus skill choices. The two players did not seem to mind.

The last change to races was for humans. During Curse of Strahd, Jeremy introduced a new way to do humans that we all really liked (in fact of the seven players, six of us played humans). Goes like this: +1 to four different stats, extra language, skill, and tool proficiency. Now you will notice this omits the bonus feat as in the variant human traits detailed in the PHB on page 31. I will get back to that later.

For classes, I am pretty open. I allow most Unearthed Arcana material, unless it has been updated in a formal publication. Also, it is not secret I am a fan of the pugilist class, by Sterling Vermin Adventuring Co., so they are in for sure. But the one class I have never liked is monks; they just do not fit my themes, but I could see opportunities for them in the future. We had an artificer in our Curse of Strahd campaign, a gunsmith. Really dug it, but there are no firearms in my world. Alchemy though, is all good.

Rule 3 Playable Classes: All in PHB (except monk), Pugilist, Artificer (Alchemist only). No psionic based classes.

Obviously D&D 5e has come a long way in its few years. The feat list in the PHB is pretty good. It has been expanded with racial and skill based feats over a few Unearthed Arcana and books, notably Xanathar’s Guide to Everything. Bringing it back to Matt Mercer, his Tal’Dorei Campaign Guide has some great material to draw on including some new feats. Had to include those.

Above you read how my human variant does not include a bonus feat. Well that is because everyone gets a bonus feat at 1st level! This hearkens back a bit to 3.5, allowing players to be the same subclass but have distinctions from the get go.

To flesh out all these technical elements comes backgrounds. While the premade backgrounds are great, often they do not fully match a player’s vision. As such I allow mixing and matching. In addition, Xanathar’s Guide to Everything includes the amazing life event charts. These actually added a huge amount to character’s backstories. This is probably the most open element of my character creation process, and rightfully so. It lets players not only flesh out their characters, but also gives me points of interest to tie into my own storyline.

Rule 5 Backgrounds: Mix and match background elements and use the Life Event Chart.

Re-considering all of these about three months later, it makes me realize how this sort of groundwork helps make great characters. And characters make the story. While some of these rules are restrictions, others are opening. No two games of D&D need to be the same and these options Reciprocal storytelling and creation is a corner stone of D&D.

My next post concerning my campaign will be about our house rules and where they come from and their rationalization. Let me know what your character generation rules are for you campaign on Twitter @OnlyPlayWizards